Story of a deportation 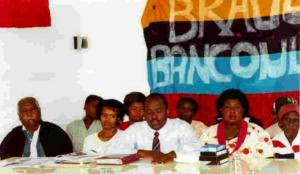 Almost four decades have elapsed but Dervillie Permal remembers clearly the summer day in 1971 when the British Government evicted him from the Chagos Islands, the tropical idyll in the heart of the Indian Ocean that was his home.
Now 73, his face contorts with anguish as he recalls in his native Creole how he had just left work at a coconut plantation when armed soldiers stopped him, told him he had to leave immediately and escorted him to a ship that was packed with weeping islanders. He was not permitted a final visit to his home. He was allowed to take only the possessions he had with him. His dog and livestock were killed.
A week later the Nordvaer deposited its wretched human cargo 1,200 miles away in Port Louis, the capital of Mauritius, a British colony at the time. There he was reunited with his wife Marie Aimee, who had taken their two children to Port Louis for medical treatment two years earlier and had been barred from returning to the sun-blessed archipelago.
The islanders – mostly illiterate, unskilled and penniless – were given no help to resettle. They lived in dirt-floor shacks in the slums of the city. Mr Permal scraped a living unloading rice from ships. Mrs Permal earned a few extra pennies from sewing. They raised seven children. Last year Hengride, their daughter, brought them to live with her in a three-bedroom, semidetached house that is occupied by ten Chagossians in the Sussex commuter town of Crawley.