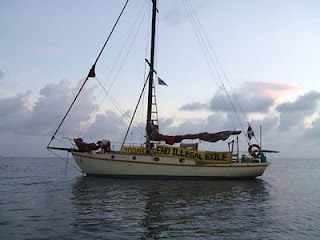 Pete and Jon have been arrested in Diego Garcian waters. We have been told they are well but we haven't heard from them since their arrest. See the Home page for more coverage on their arrest. Below we reproduce the statement that they have prepared to give to the UK and US governments: We have sailed our boat Musichana over 2000 miles to demonstrate to you the serious nature of our concerns about the plight of the Chagossians and about your military activities on Diego Garcia.

It is our duty as British citizens, to challenge and expose these activities in a peaceful and responsible manner.

We represent a growing proportion of the world's population, who disagree with the treatment of the Chagossians and demand their right to return.

--The Chagos people were the legitimate inhabitants of the Chagos Archipelagos.

--Three generations of Chagossians are buried on the island.

--The UK courts have consistently supported the Chagossians in their right to return.

--While commendable, it is simply not good enough to allow some Chagossians to come back to clean and restore graveyards. When the work is finished they have to leave again.

We are disgusted by your military activities, because history has proven that violent military conflicts and all forms of terrorism solve nothing. Yet your actions and those of your respective Governments, which corruptly entangle profit making business with political and military decisions, continue to increase militarization and the use of force as a first rather than a last option and only perpetuate global instability and terrorise innocent people.

Your base here is, together with the other US bases throughout the world, part of an axis of evil and represents all the corruption and subversion of human decency. From here your bombers have rained terror, horror and destruction, often onto the heads of innocent people. It has also been used for secretly transporting and holding prisoners without regard to even the most basic and accepted concepts of justice.

We urge you, in the name of humanity to cease your inhumane activities. You must leave Diego Garcia forthwith and end your shameful and harmful presence here, so that the rightful inhabitants, who you exiled nearly forty years ago can return to their homes and live in peace.

The story of the "People's Navy" voyage to Chagos.
Geplaatst door AdR op 06:43