Guantánamo’s ghosts and the shame of Diego Garcia 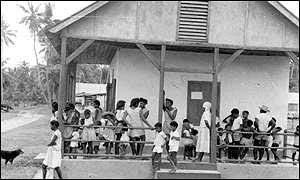 One of the more sordid and long-running stories in Anglo-American colonial history –- that of Diego Garcia, the chief island of the Chagos Archipelago in the Indian Ocean –- reared its ugly head again on Friday when the UK’s all-party foreign affairs committee announced plans to investigate long-standing allegations that the CIA has, since 2002, held and interrogated al-Qaeda suspects at a secret prison on the island.

The shameful tale of Diego Garcia began in 1961, when it was marked out by the US military as a crucial geopolitical base. Ignoring the fact that 2,000 people already lived there, and that the island –- a British colony since the fall of Napoleon –- had been settled in the late 18th century by French coconut planters, who shipped in African- and Indian-born labourers from Mauritius, establishing what John Pilger called “a gentle Creole nation with thriving villages, a school, a hospital, a church, a prison, a railway, docks, a copra plantation,” the Labour government of Harold Wilson conspired with the administrations of Lyndon Johnson and Richard Nixon to “sweep” and “sanitize” the islands (the words come from American documents that were later declassified).

Although many islanders traced their ancestry back five generations, a British Foreign Office official wrote in 1966 that the government’s aim was “to convert all the existing residents … into short-term, temporary residents,” so that they could be exiled to Mauritius. Having removed the “Tarzans or Men Fridays,” as another British memo described the inhabitants, the British effectively ceded control of the islands to the Americans, who established a base on Diego Garcia, which, over the years, has become known as “Camp Justice,” complete with “over 2,000 troops, anchorage for 30 warships, a nuclear dump, a satellite spy station, shopping malls, bars and a golf course.” So thoroughly were the islands cleared –- and so stealthy the procedure –- that in the 1970s the British Ministry of Defence had the effrontery to insist, “There is nothing in our files about a population and an evacuation.”