Social life in the Chagos: the folklore 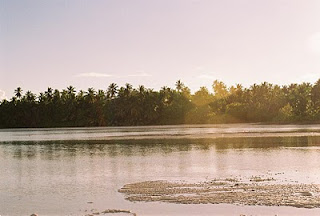 Far from the hectic and consuming life of Mauritius, we led a very peaceful life on our small islands.

There was no mad rush, we all lived according to our own rhythm, never in fear or in stress of having to strive to make both ends meet in order to feed the members of our family. Our society was constituted in such a way that we always had whatever we wanted, there was no poverty and no misery.

We never knew the meaning of hunger, deprivation or starvation until we were moved to Mauritius. We always had plenty of food, we ate to our heart’s content and drank to our good fortune. This was due to the fact that many, if not all of us, reared animals and poultry (chickens, ducks, pigs, turkeys, geese, guinea fowl, rabbits), we also grew fruit and vegetable gardens and vegetables that one family did not have were always obtained from another family in exchange for a vegetable that it did not have. Some of us had beehives, which produced fresh honey for the community. All of us knew how to fish and take food from the resourceful lagoon. Some of us were full time fishermen, the rest would fish whenever they had to or felt like it. We had the best fish, lobster, octopus and crab, ever. We always had fresh fish, most often red snappers and ‘babonne’ which are sold at over $25 a pound on western and far eastern markets and which we had for breakfast, lunch and dinner. Inasmuch as fish have traditionally been a significant element of our diet, we were torn by the fact that we did not have the means to get fresh fish in Mauritius; all we could have was frozen fish, which, from all angles you look at it (nutritionally and taste), was a different thing altogether, if you could even get it. It is not that there is no fish in Mauritius, but on an island of 1.2m inhabitants, the lagoons having been emptied of their fish, fishermen have to be well organised to go outside the lagoons, which makes the fish much more expensive and not available to poor people like ourselves. I have a hard time imagining Italians being deprived of pasta and pizza, Chinese of rice and noodles, Americans of burgers, fries and ice cream: for us, fresh fish and other fresh sea produce was the basis of our diet. We cooked and had them in one hundred different ways.

From: Our life in Chagos
Geplaatst door AdR op 05:20

Email ThisBlogThis!Share to TwitterShare to FacebookShare to Pinterest
Labels: Deportation, Life on Chagos