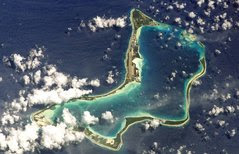 The organisation Reprieve works to enforce the law for the human rights of prisoners, from death row to Guántanamo. The list of hidden prisons or prisoners. On Diego Gracia:

Suspicions were first raised by an open letter on to Prime Minister Tony Blair on 28 December 2002, when Human Rights Watch suggested that U.S. forces were holding and interrogating al-Qaeda suspects on Diego Garcia, violating international law and the legal obligations of the British government.

In a subsequent series of questions and answers in Parliament from 2003 until 2008, the UK Government consistently denied the allegations.
Further reading.

Reprieve on the history of Diego Garcia.
Geplaatst door AdR op 09:58 No comments: