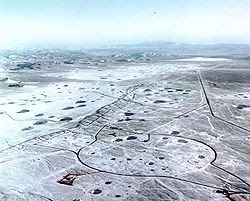 The Foreign Office is coming under mounting pressure to tell the truth about whether there are plans by the US to use the British island of Diego Garcia as a base to launch an attack on Iran.
Leading opposition politicians are demanding answers from UK ministers on the role played by the Indian Ocean atoll in previous attacks on Iraq and Afghanistan, and in any future strikes.
Last week, the Sunday Herald revealed 387 bunker buster bombs were being shipped to Diego Garcia by the US. Some experts suggested the move could be in preparation for a possible strike against Iran’s nuclear facilities.