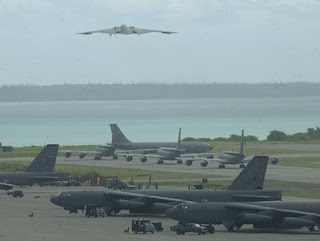 Diego Garcia is the largest island in the Chagos archipelago - a group of more than fifty islands in the Indian Ocean. Formerly part of the British colony of Mauritius Diego Garcia is now a huge American naval base. Used to launch strikes against Iraq both during "Operation Desert Storm" and during the recent invasion Diego Garcia was also a vital asset in the bombing of another essentially defenceless target- Afghanistan.

When Mauritius was negotiating its independence the British Government insisted that the Chagos islands must remain under British sovereignty. Unknown to the Mauritian government the British had already made a deal to lease the islands to the United States. However as a condition of the deal the US insisted that the islands must be emptied of its human population and so from 1968 to 1974 Britain carried out, in secret, the removal of the entire population of the islands.

Interestingly Diego Garcia was not the US’ preferred [site] for its naval base; they had originally favoured the island of Aldabra. However that island was populated by a rare species of tortoise and the US feared that any attempt to disturb them might lead to an embarrassing confrontation with publicity savvy green activists. They guessed, rightly as it turned out, that while the removal of endangered tortoises would raise protest, the removal of mere human beings would elicit rather less concern.

A variety of methods were employed to spirit the population from the islands. Chagossian's making routine trips to Mauritius were simply barred from returning to the islands, others were lured by offers of free trips to the mainland and were never to return. Finally Britain forcibly removal of the remaining population. In 1966 foreign office diplomat Dennis Greenhill remarked, with all the studied indifference of Britain's educated elite, that: "along with the birds go some... Man Fridays whose origins are obscure"

Most of these "Man Fridays", who now number around five thousand individuals, found themselves living in the slums of the Mauritian capital Port Louis. Some died of starvation whilst the rest scraped a bare existence working in the lowest paid jobs. Unemployment amongst the Chagossians is high; they are discriminated against and have found adapting to life in Mauritius unbearably hard.

Since their forced removal the Chagossians have been campaigning for their right to return to the islands, a campaign that has been frustrated at every turn by successive British governments. In 2000 the campaigners achieved a partial victory in the High Court, which ruled that the removal of the islanders was a "legal failure" and that the islanders could return to the outlying islands (though not Diego Garcia itself). The British Government refused to implement the ruling; making no attempt to rebuild the infrastructure on the outlying islands, whilst falsely claiming that resettlement was not feasible.

On October 9th 2003 the High Court ruled against the islanders' right to return to Diego Garcia claiming, against all the evidence, that "it could not be maintained that Britain had deliberately deceived the Chagossians."

Following the ruling Richard Gifford, a lawyer representing the islanders remarked that "when you have been kicked around for 30 years, you get a bit used to setbacks."

- Looking for the most infamous quote from the Colonial Office in Westminster I only found this story on the net on a site (or a portal?) in Arabic of which I do not understand anything, frankly.
Geplaatst door AdR op 05:20